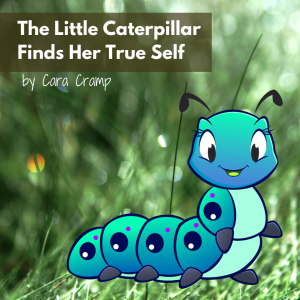 The Little Caterpillar Finds Her True Self by Cara Cramp

Once upon a time there was a little caterpillar and every day, she saw the big caterpillars cross the
wooden bridge to become big, beautiful butterflies. They would often fly back over the bridge and say
how wonderful it was to be transformed and safe. Little caterpillar longed to be a big butterfly and fly
across the land to see the beautiful creation below her. The problem was, that little caterpillar was still
too small to cross the bridge safely. You see, the wooden bridge was very old and had lots of cracks
right in the very center of its structure and if the caterpillars were too small or did not look a head of
them towards the beautiful rainbow ahead they would fall through the cracks into the running waters
below and lose themselves.

Little caterpillar could not understand why she could not get herself over the bridge and she began
believe that it was because she was battered and scarred from all the pushing and shoving from the
other caterpillars and some how or other she was the reason the bridge became cracked, rotten and
bad. It was like every time she took a step on the bridge it cracked some more. Little caterpillar didn’t
realise that it was not because she was bad but because of what happened to her when she tried to
cross the bridge.

JC listened hard and then told little caterpillar he did not believe she was bad and he knew her head
could understand this but in order for her heart to truly believe it she needed to cross the bridge
where he would be there to help her to spin into a cocoon to become a big beautiful butterfly. Little
caterpillar so wanted to be a butterfly but she was scared and her head and her heart often wanted to
do different things. Little caterpillar didn’t know JC, the big yellow butterfly very well and she didn’t
trust him. How would she know she would be ok? She thought. JC didn’t push little caterpillar, as it
had to be her choice to choose trust him and make the big journey across the wooden bridge. Every
day the big yellow butterfly visited little caterpillar and day-by-day she began to trust him more.
Eventually the day came when JC said it was time for her to truly trust him and cross the bridge. Little
caterpillar felt ready. It was an exciting day but also sad because by this time JC was older and very
tired from all his flying backwards and forwards over the bridge and he had lots of scars on his wings
from his journeys. Little caterpillar carefully made her way over the wooden bridge towards the
rainbow in the distance. As she crossed the bridge she slipped a little into the cracks and broken parts
but she kept her eyes on the rainbow and pulled her self through. Every now and again she looked
back to see where JC was and every time, she looked she saw he was lower and lower in the sky.

It felt like a long crawl over the bridge and little caterpillar couldn’t always remember which way she
had come but she kept going.

Just as little caterpillar approached the centre of the bridge she saw JC settle on the wood. She
thought he looked exhausted from all his fluttering and flying around and she was worried that he
might leave her behind. Just as she was about to turn back JC told her that this part of the bridge was
the most fragile and to ease her journey he would stretch his wings across the bridge so she could
crawl over his silky body. JC explained he was coming to the end of his big yellow butterfly days on
this side of the bridge but would be with her again when she got over the bridge. When little
caterpillar heard this she felt so sad and frightened, she wanted to be a butterfly so much but she
didn’t want JC to die, she had begun to trust him and didn’t want him to go.

Then a remarkable thing began to happen, the sun was shining and it was warm but just as little
caterpillar stepped onto JC’s yellow wing it began to rain. It rained and rained and the big yellow
butterfly became wet and soggy. He could no longer fly and his wings were stretched fully over most
of the broken parts and cracks in the bridge. He looked like he was in so much pain. Little caterpillar
knew in her heart that JC was giving up his life on this side of the bridge so that she could get to reach
her freedom. Little caterpillar walked as carefully as she could, over JC’s wings and onto the wood
once again. Just as she passed the centre of the bridge she saw JC sink into the cracks and a cross
formed over him. Little caterpillar could no longer see him and she felt her anger rising. Why did he
leave me, she questioned, he said he wouldn’t leave.

Little caterpillar felt abandoned and began to cry, she hurt so much. Her tears trickled into some of
the cracks on the bridge and as they rolled along the grains in the wood some of the cracks began to
disappear and instead of big holes and gaps where the bridge had split, the wood joined together and
small lines lay in their places. Little caterpillar thought it gave the bridge character and knew JC’s
strength had helped her to begin to see things differently. As she looked into the sky, hoping to see JC
once again she saw the rainbow in the distance. Little caterpillar watched as it grew and stretched
itself right over the bridge; you could have seen it for miles around. At the same time the little
caterpillar began to see her true self for the first time in her life. She noticed that just like the bridge
her bumps and bruises were gone and all that was left was her individual colours and some small
scars, which showed she had been on a journey.

Little caterpillar didn’t much like the scars but she knew she was changing and shouted from the top
of her little voice. “ Thank you JC for letting me keep what makes me, me!” She took one last big step
and crossed over the bridge. As she looked back she could see the yellow from JC’s wings shining
through the cross on the bridge and she felt the funny feeling in her antennae again but this time she
knew what the feeling was, it was love and this reminded her that JC was still with her in her heart. As
she stepped onto the green grass on the other side of the bridge she noticed that her head was telling
her heart that she liked the colour green and she allowed herself to enjoy the green flowers in the
garden. Whilst she was crawling through the flowers, she saw a beautiful big yellow flower with a
brown and yellow cross in the centre.

The flower instantly reminded her of JC and she crawled over to it. By this time she was very tired and
she snuggled into the big flower and it felt like JC’s silky yellow wing. The flower protected her as she
spun herself into a tight cocoon and she could feel JC close to her heart. Although she couldn’t see JC
she could hear his voice inside her cocoon and she fell into a deep sleep.

When she woke it was all dark and warm inside her cocoon and she could still feel JC’s flower on the
outside of her cocoon. After her long sleep little caterpillar needed to stretch and as she pushed, the
silky cocoon began to split open and she emerged from the dark into the bright morning sun. Little
caterpillar began to explore her new surroundings and as she didn’t feel any different yet she shuffled
herself along the ground. It feels much harder to crawl than before she thought. Little caterpillar
didn’t understand why her body felt so heavy and didn’t know why she couldn’t see JC; after all, he
had said he would be with her on the other side of the bridge. Next to the big yellow flower was a
pond and the flower seemed to be facing the water as if it was showing little caterpillar to go towards
the water, she remembered JC’s words “trust” she bent down to take some of the cool water into her
dry body and as she did she saw the most colorful butterfly she had ever seen and at the same time
heard JC’s voice. It seemed to be coming from the centre of the flower and she had to listen hard and
focus on his words “ That’s you” the voice said “You are just as you are meant to be, fearfully and
wonderfully made, now fly beautiful butterfly, spread your wings and be free.” Little caterpillar could
feel JC’s spirit in her heart so she spread her beautiful coloured wings and flew high into the sky.
From high above she could finally see all the other butterflies fluttering around. Little butterfly still
had some growing to do but now at least she believed her heart was not filled with badness but with
JC’s spirit and that funny feeling she used to feel in her antennae, well she could feel that sinking into
her heart too and with JC’s guidance her head helped her to connect the feeling with a name and she
knew it was called Love. Little butterfly felt loved and safe and finally went off to explore her new life
in the garden of butterflies.

We are so happy to have you join us! Keep an eye out for our next community news email!

Posted in The Power of Creativity - Mental Health Exhibition, Updates

To My Three Children by Rachel Clarke